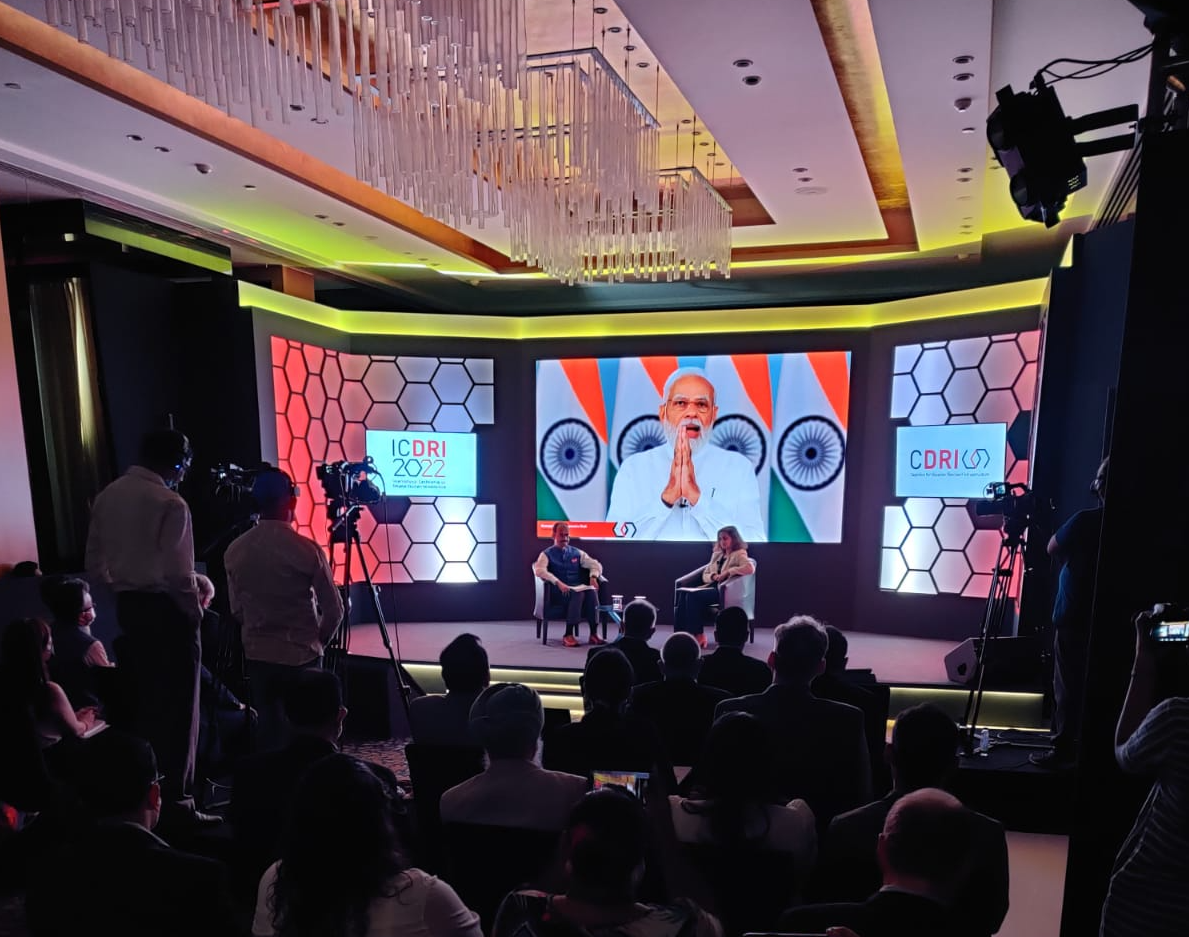 New Delhi, 4 May 2022:  The Coalition for Disaster Resilient Infrastructure (CDRI), in partnership with the U.S. government and through USAID, opened ICDRI 2022 today.

The inaugural session of ICDRI 2022 witnessed the Heads of Government from CDRI Member Countries including, India, Australia, Japan, and Madagascar share their perspectives on the opportunities and challenges to build climate and disaster resilience in transitioning infrastructure systems. The session focused on processes through which countries can collectively accelerate the shared goal of building climate and disaster resilient societies and eco-systems.

Inaugurating the conference, H.E. Narendra Modi, Prime Minister of India said, “Infrastructure is not just about creation of capital assets, and generating long term return on investment. It is not about the numbers, it is not about the money, it is about people. It is about providing them high quality, dependable and sustainable services. In an equitable manner, people must be at the heart of any infrastructure growth story. And that is exactly what we in India are trying to do.” He further added, “With modern technology and knowledge at our disposal, can we create resilient infrastructure that is built to last. Recognition of this challenge underpins the creation of CDRI. In the short time of two and half years, CDRI has undertaken important initiatives and made valuable contributions. To make our future resilient, we have to work towards a resilient infrastructure transition which is the primary focus of this conference.”

H.E. KISHIDA Fumio, Prime Minister of Japan shared his views by stating, “Japan intends to contribute to the initiative of the Coalition for Disaster Resilient Infrastructure, utilizing the knowledge and technologies fostered through our past experiences of disasters such as earthquakes and typhoons. We also expect CDRI to play a significant role in the Quad's efforts for adaptation to climate change. In this context, I am delighted to learn that this year's ICDRI will feature a session where experts from the four countries, namely Australia, India, Japan and the United States are expected to exchange their views towards augmentation of disaster resilience and collaboration in the Indo-Pacific Region.”

H.E. Andry Rajoelina, President of the Republic of Madagascar said, “It is a pleasure to be with you today, though virtually, for the opening ceremony of the 4th International Conference on Disaster Resilient Infrastructure. In just a few years, this conference has become an important space for discussion and deliberation on the resilient future of our infrastructure systems. We have recently joined the CDRI and are honored to be part of this global partnership. We are determined to bring our active participation and to share with other countries our experience on climate-related disaster management. Madagascar is committed and determined to work for our common cause of promoting disaster and climate change resilient infrastructures, not only in our country but all over the world!”

The first day of the conference witnessed sessions on themes including utilizing a future-thinking and foresight approach, refurbishment and replenishment of aging infrastructure, and integrating resilience and adaptation into infrastructure investment. The opening day of the conference hosted policy forums discussing regional cooperation to strengthen resilience infrastructure and communities in the Indo-Pacific, and risk assessment and resilience metrics to inform the creation and management of infrastructure assets. The opening day also included a session highlighting the Whole of Government approach to Climate Change and Resiliency by the U.S. government.

Addressing the United States Government Interagency Session, the U.S. Chargé d’Affaires to India, Patricia Lacina said, “The Biden-Harris Administration has made combatting the climate crisis a foreign policy priority. The United States is working to reduce greenhouse gas emissions and increase investments in climate adaptation and resilience. Our support for the Coalition for Disaster Resilient Infrastructure (CDRI) is a clear complement to President Biden’s call for U.S. leadership and climate action. Engaging the global community, including the private sector, governments, and multilateral agencies, is the only way we will tackle the climate crisis.”

Addressing the conference, Mr. Kamal Kishore, Member Secretary, NDMA and Co-chair Executive Committee, CDRI, highlighted that “Infrastructure around the world is undergoing transition. The real challenge is how do we make sure that the narrative remains focused on people we wish to serve through infrastructure services. The key question is how do we turn the conversation around to make it about people rather than about capital assets created.”

The Coalition for Disaster Resilient Infrastructure (CDRI), is a multi-stakeholder global partnership of national governments, UN agencies and programmes, multilateral development banks, the private sector, academic and knowledge institutions. CDRI is led and managed by national governments, where knowledge is generated and exchanged on different aspects of disaster resilience of infrastructure.

CDRI aims to address the challenges of building resilience into infrastructure systems and associated development. It provides a forum for countries at all stages of development — to access knowledge and resources from other members, to make their infrastructure resilient and thus, contribute to each other’s economic growth and progress. It promotes rapid development of resilient infrastructure to respond to the Sustainable Development Goals’ imperatives of expanding universal access to basic services, enabling prosperity and decent work.