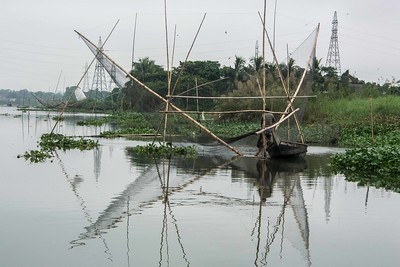 The Coalition for Disaster Resilient Infrastructure (CDRI) is a multi-stakeholder global partnership of national governments, UN agencies and programmes, multilateral development banks and financing mechanisms, the private sector, and academic and knowledge institutions. It addresses the challenges of building resilience into infrastructure systems and development associated with it.

The Sendai Framework for Disaster Risk Reduction (SFDRR) highlights the role of improved disaster resilience of infrastructure as a cornerstone for sustainable development. The SFDRR includes four specific targets related to loss reduction: (1) Reduce global disaster mortality; (2) Reduce the number of affected people; (3) Reduce direct disaster economic loss; and (4) Reduce disaster damage to critical infrastructure. Target (4) on infrastructure is an important prerequisite to achieving the other loss reduction targets set out in the framework. Thus, there is a clear case for ensuring that all future infrastructure systems are resilient in the face of disasters in order to protect our investments.

3. When was the idea for CDRI proposed?

The Prime Minister of India launched CDRI during his speech at the UN Climate Action Summit on 23 September 2019. The Prime Minister had initially announced India’s intention to work with partner countries and key stakeholders to form a coalition working towards the goal of improving the disaster resilience of infrastructure at the Asian Ministerial Conference on Disaster Risk Reduction (AMCDRR) held in November 2016 in New Delhi. Since the AMCDRR, the Government of India has advocated for the issue of DRI and organized a series of consultations, advocacy efforts, and preparatory work at various regional and international forums.

4. What is the objective of the CDRI?

The CDRI is a global partnership that aims to promote the resilience of infrastructure systems to climate and disaster risks, thereby ensuring sustainable development. It seeks to rapidly expand the development and retrofit of resilient infrastructure to respond to the Sustainable Development Goals imperatives of expanding universal access to basic services, enabling prosperity and decent work.

The Coalition functions as inclusive multi-stakeholder platform led and managed by national governments, where knowledge is generated and exchanged on different aspects of disaster resilience of infrastructure. It brings together a multitude of stakeholders to create a mechanism to assist countries to upgrade their capacities, systems, standards, regulations and practices with regard to infrastructure development in accordance with their risk context and economic needs. Its success will be reflected in the quality of technical support it is able to provide, and the capacity development it is able to support for the development of disaster resilient infrastructure in the participating countries.

5. Who benefits from the CDRI?

The Coalition provides a forum for countries at all stages of development, to access knowledge and resources from other members to make their infrastructure resilient and thus, contribute to each other’s economic growth.

(2) For countries at an advanced stage of infrastructure development, CDRI provides an opportunity to engage with the development of robust infrastructure systems that are interconnected globally. As with other nations, the challenge for them is to transform how infrastructure is designed, constructed, operated and maintained, and develop the financial incentives, standards, governance arrangements and capacities that are required to facilitate the resilience of infrastructure to extreme events and changes in future hazard patterns, while fulfilling the commitment to leave no one behind.

6. Is CDRI an intergovernmental organization?

CDRI is a multi-stakeholder global partnership of national governments, UN agencies and programmes, multilateral development banks and financing mechanisms, the private sector, and academic and knowledge institutions. At present, it is not an intergovernmental organization, which are ordinarily treaty-based organizations.

7. What would be the rights and obligations that joining CDRI would entail for its member nations?

Envisioned as a partnership, the CDRI is not organized around the notion of rights and obligations. However, national governments that endorse the Charter and become a member of the CDRI have a key role in setting its substantive agenda as well as in its governance. It may be noted that the policies, standards and other outputs of CDRI would not be binding on its members.

8. What would be expected from members after joining CDRI?

The CDRI will benefit from the member countries’ expertise and experience in building disaster and climate resilience into their infrastructure systems. In particular, their experience and expertise on assessing disaster and climate risk to infrastructure projects as well as their experience in developing standards and regulations to make infrastructure resilient would be valuable. Such experience sharing will contribute to collaborative research projects or address the specific needs of other members of the Coalition. All such experience sharing would be entirely voluntary. Beyond their technical expertise, we would like the member countries' support to help enlarge this conversation with other countries and expand the partnership.

9. What is the role for the private sector in the Coalition?

A large share of the estimated fund requirements to cover the core costs over the first five years has been invested by India. There are no obligations on the part of members to make financial contributions to CDRI. However, at any point (during the first five years or beyond), members of the CDRI may make voluntary financial or in-kind contributions to the CDRI such as assignment of experts from national institutions to the CDRI Secretariat, hosting of thematic workshops and meetings and travel support.

11. Where is the Secretariat of CDRI?

The CDRI Secretariat is based in New Delhi, India.

12. How does the CDRI understand “infrastructure” and “disasters” in its context?

The scope of “disasters” includes those emanating from natural hazards as well as man-made hazards. In practice, while looking at the resilience of a particular infrastructure system, the emphasis would depend on its risk exposure to different kinds of hazards, whether natural or man-made.

13. How is CDRI’s potential different from work that has already been done in this domain (for example, initiatives by the G20, APEC or the OECD)?

In proposing the Coalition, we analysed other initiatives that exist on the topic in the global policy discourse. The initiatives led by G20 (Global Infrastructure Hub and the Quality Infrastructure Agenda), APEC (Quality of Infrastructure Development and Investment) and the OECD (Long Term Infrastructure Investment Project) have a broader thematic footprint focusing on increasing investment in infrastructure, improving the management of infrastructure projects, ensuring local economic benefits etc. The CDRI has a more focused mandate that will deal only with issues of “disaster resilience”. The CDRI is different in two additional ways: (1) It focuses on assisting countries in developing their national capacities and systems as opposed to servicing only the internationally funded infrastructure projects; (2) it brings together both developed and developing countries and facilitates two-way knowledge transfer.

The Coalition is envisaged as an intensive knowledge exchange and capacity development platform that assists partner countries and members to build their own capacities, systems and standards for the development of disaster resilient infrastructure. These capacities will serve the development of all infrastructure irrespective of whether they are built from domestic resources or international resources. In that sense, the Coalition is complementary to these initiatives and seeks to fill the gap to meet the needs of countries in the developing as well as developed world.

14. What is the specific knowledge niche of CDRI?

Existing guidelines for developing infrastructure resilience tend to either be overwhelming or not comprehensive enough to promote practical adoption. This is a specific niche that the Coalition works to address through the co-creation of a collaborative platform for collection, analysis and dissemination of various good practices for different infrastructure classes. This facilitates a horizontal exchange of knowledge among countries. The Coalition focuses on infrastructure “systems” over individual infrastructure “assets” to help countries develop risk management frameworks for different infrastructure classes and associated development. Some of these systems have global dimensions (e.g. shipping, aviation) and the CDRI fosters collaboration to identify hotspots in the global infrastructure systems that may have cascading impacts.

In the development discourse, “climate” and “disaster” resilient infrastructure are terms that are often either clubbed together or used interchangeably. Both terms fundamentally mean making infrastructure systems resilient to extreme events or progressive environmental impacts to maintain their functional integrity. However, there are some key areas of distinction:

(1) DRI also includes addressing disaster risk due to geophysical and geomorphological hazards such as earthquakes, landslides, tsunami and volcanic activity. Since infrastructure systems are built for long life cycles, it is imperative that DRI addresses risks emanating from such low frequency high impact events.

(2) DRI must deal with technological hazards like nuclear radiation, dam failures, chemical spills, explosions which are not directly linked to climate.

(3) More than 90 percent of disasters are a manifestation of weather and climate-related extreme events. In that sense, making infrastructure climate-resilient also contributes to making it disaster resilient.

(4) Some CRI efforts may focus on reducing carbon footprint of Infrastructure. While this may be a byproduct of DRI, DRI does not explicitly address these aspects.

Climate and weather-related hazards are likely to become more intense and frequent in many parts of the world. However, there is uncertainty with regards to specific manifestations at the local level. Dealing with these uncertainties is a common challenge for building both climate and disaster resilient infrastructure systems.

16. Where can I get more information about CDRI?

All queries may be directed to info@cdri.world